When a holiday rolls around, food is always part of the conversation. Whether it’s Easter, Thanksgiving, or Christmas, having a succulent ham on the dinner table will get people talking! 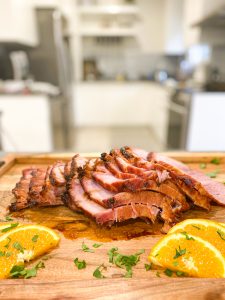 This recipe even surprised us, the first bite made our taste buds dance. We love this recipe because it has a slight Canadian spin on your typical glazed ham. Since we are in Canada, why not add Canadian maple syrup?

The glaze is such a crucial part of a ham. The key is to create a sweet, yet savoury glaze that doesn’t overpower the ham’s naturally delicious flavours.

The ham we used is a Smoked Bone-In Ham from Halenda’s Meats! This ham was partially cooked, so it only needed around 4h 30 minutes of total cook time at 325 degrees Fahrenheit.

When choosing your ham, you will find that there are a lot of options out there. We prefer an un-sliced bone-in half ham. We choose un-sliced because it is less likely that the ham will dry out after cooking. The size of your ham is important as well. We used half a ham, which will comfortably feed ten people.

Many people take the rind or fat off before cooking. We kept the rind on for the first 3:30 minutes so the ham could absorb all the amazing flavours. After the 3h 30 minutes were up, that’s when we carved off the rind and fat. This is the point where we glazed our ham and put it back in the oven, uncovered for around 1 hour. At this point, the aroma of the ham should be filling your home and turning a beautiful golden brown.

We paired our ham with mashed potatoes, carrots and these ultimate brussel sprouts that are loaded with the top Canadian ingredients. 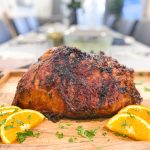 This easy Thanksgiving ham will get your guest talking! We added a Canadian spin to the recipe and used a Canadian staple, Maple Syrup!

For this recipe, we used a Smoked-Bone in Ham from Halenda's Meats. This cut of ham is partially cooked and will need 4h 30 minutes of cooking time at 325 degrees F. 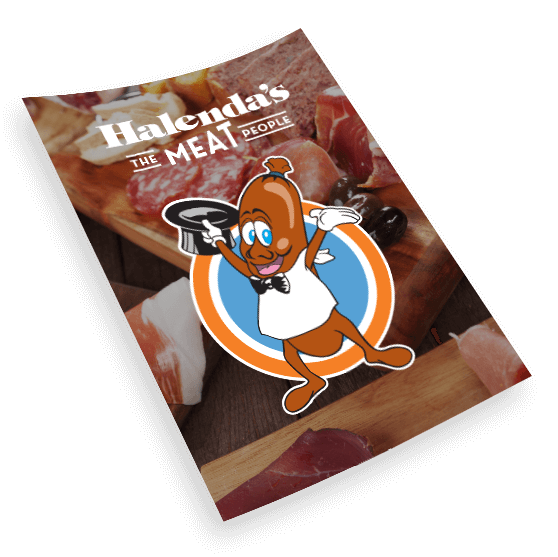